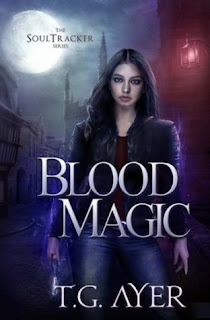 In the DarkWorld the things that go bump in the night are most likely true. And the problem is they are probably not sticking to bumping around in the night. They are everywhere. Your work colleagues, your teachers, even your friends. They’ve been living that way for a long time. And you haven’t noticed becsuse they don’t want you to.
You’re much better off not asking any questions.Mel Morgan is a Master Teleporter. She can move through the Veil into the otherworldly planes. A handy skill when looking for missing people. It’s a lonely job, but with her gargoyle partner she’s never minded lonely.Until a certain super-hot Djinn walks into her life. He needs her help to find someone he loves. And Mel can never say no to someone in need. But the road to helping Saleem is fraught with secrets better left uncovered.Can Mel and Saleem dodge demons and sorcerers long enough to save the ones they love?


I got a copy of this book in the mail on my eleventh birthday along with an acceptance letter to Hogwarts (which is super crazy since neither this book, nor Hogwarts existed on my eleventh birthday. Not to mention the fact that I'm American so I should have gotten a letter to Ilvermorny). It's pretty obvious to me that a Time Lord was mucking about with things, but apparently I wasn't supposed to know about that, so forget I said anything.

Anyway, it seemed fortuitous that both this book and a Hogwarts acceptance letter would arrive at the same time, so I figured I should probably read the book post haste in preparation for my future schooling endeavors. It didn't take long for me to realize that no one at Hogwarts practices blood magic, so clearly I was going to have to learn this through an independent study, thank goodness I had the book!

It wasn't until near the end of first year when Harry battled Professor Quirrel in the dungeons that I realized why I needed to learn blood magic. Obviously I would be integral in the fight against Lord V. so I devoted all of my spare time to studying this book. I didn't even watch a single Quidditch game the whole time I was at Hogwarts, that's how devoted I was. And let me tell you, it took a whole lot of trial and error and a couple of virgin sacrifices for me to master the art of blood magic. I'm pretty sure no one will figure out what my horcruxes are, so I should be able to practice for years to come even.

I give this book 4 boiling cauldrons.

Her latest to hit the shelves is the Dark Sight Series - steeped in Greek Myth in a world where Greco-Roman conquerers ruled for centuries, a new Oracle finds that seeing the future is not at all fun - it means preventing the annihilation of the human race. Dark Sight: Out now, Cursed Sight: June 2017Tee's Valkyrie Series is a YA Norse Mythology Urban Fantasy. When Brynn is taken to Asgard to meet with Odin, she discovers she is a Valkyrie, destined to bring warriors to Valhalla. Only problem: Loki wants her dead, & Ragnarok - the end of the the Nine Realms - is coming.Her Hand of Kali Series is a diverse YA Indian Mythology Urban Fantasy. Maya must use the powers given to her by the goddess Kali, to become the Hand of Kali - Hunter of Demons.Tee's DarkWorld contains two current series:* The SkinWalker Series, Shifter & Magic Urban Fantasy. Panther shifter & reluctant vigilante, Kailin Odel will keep you on your toes as serial killers, paranormal drugs and deadly wraiths abound.* The SoulTracker Series, Urban Fantasy with a teleporting, astral-projecting kick-ass main character, a gargoyle sidekick and a sinfully sexy djinn for eye-candy.Upcoming in the world are:* The MetalSinger (Tara), * The DeathTalker (Nerina) & * The Stolen Queen of DracysTee also has an Angels & Demons Urban Fantasy series, the Chronicles of the Irin, and if you like strong female leads with wings, and a dreadlocked albino demon side-kick, Evie's story is for you.Tee also writes Romantic Suspense and Psychological Horror as Toni Vallan. Click on Thrillers on Tee's website to find out more.And because Tee hardly ever sleeps and loves making stuff up, look out for more books, coming soon, including the Requiem of the God - an UF Eastern Mythology series.Want to know more? --->www.tgayer.comWant to chat? ---> tee@tgayer.com

If you would like to read some legitimate reviews of Blood Magic, just click any of the following links.

Fishing for Books // I Smell Sheep // Angel's Guilty Pleasures
Posted by Just Another Girl and Her Books at 12:21 PM