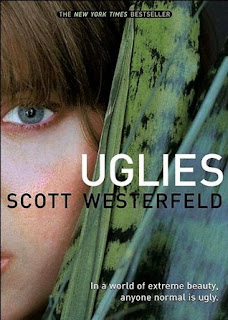 Tally is about to turn sixteen, and she can't wait. In just a few weeks she'll have the operation that will turn her from a repellent ugly into a stunning pretty. And as a pretty, she'll be catapulted into a high-tech paradise where her only job is to have fun.But Tally's new friend Shay isn't sure she wants to become a pretty. When Shay runs away, Tally learns about a whole new side of the pretty world-- and it isn't very pretty. The authorities offer Tally a choice: find her friend and turn her in, or never turn pretty at all. Tally's choice will change her world forever...

I received a copy of this book on my sixteenth birthday, but the present didn't say who it was from, which clearly means one of my "friends" thinks that I'm ugly and doesn't have the guts to tell me to my face if you ask me. But they always say to never look a gift horse in the mouth, so I read the book anyway.

I had a hard time relating to Tally, probably because my parents didn't have the money to get the plastic surgery to make me pretty, although the accidental nose job I got myself when I was fifteen helped a little bit, but it was countered by the accompanying burn scar on my right thigh. Like my parents wouldn't even let me dye my hair blonde like all the other girls in my class, and it took coating my hair with my own blood in a car accident to convince my mom to even let me dye my hair red. So I had an easier time relating to Shay, because I eventually had to convince myself that I didn't want to be pretty like everyone else anyway to help in my efforts to pretend to be happy.

So I fully understood Shay's decision to run away from home and all the pretties. I mean, sure, she said she wasn't sure if she wanted to become a pretty, but that was probably just a front to cover up an inability to make it happen. We don't even know what the authorities do behind the scenes in this world, and like, Shay's parents probably weren't willing to make the sacrifices that would have been needed for Shay's operation (I bet youth has to be sacrificed somewhere.) And I don't think Tally is a very good friend for not being more supportive of Shay. I realize the authorities put her in a shitty place, but she still could have rebelled. Katniss Everdeen would have.

So, like, I give this book a 3 out of 5 because it was entertaining, but it kind of brought back some real bad memories for me.

Scott Westerfeld's teen novels include the Uglies series, the Leviathan and Midnighters trilogies, and the so-called "NYC Trilogy": So Yesterday, Peeps, and The Last Days. Scott was born in Texas, and alternates summers between Sydney, Australia, and New York City. His next book, Afterworlds, comes out September 23, 2014.

If you would like to read some legitimate reviews of Uglies, just click on any of the following links.

YA Books Central // Teen Reads // Kirkus Reviews
Posted by Just Another Girl and Her Books at 2:44 PM