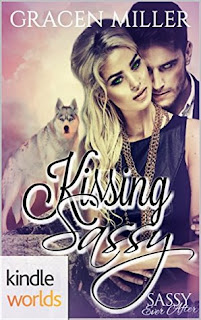 Wild and free, Cajun thought he was content.Cajun Wolfe doesn't have time for trouble in five-inch stilettos, but that's what he gets in the form of Hollywood's leading lady. When Olivia Scott waltzes into Blue Creek's shifter bar seeking his expertise for help with a stalker, Cajun's convinced she's a thrill seeker and he scorns her request. Soon he realizes he might've just met his match in a human, who also happens to be his mate. Olivia's not just sassy, stubborn, and unpredictable, she has a temper to match his too.Then Olivia showed him what he was missing.Olivia Scott has had it with arrogant men. Cajun scoffing at her genuine need for help is the final straw. Determined to find another that'll take her seriously, she storms off only to be attacked in the parking lot. Playing the part of unlikely hero, Cajun defeats her assailants. Meeting her mate in the form of a snarly wolf-shifter with a bad attitude is rotten luck. He's also a weakness she can't afford.Trouble never looked so fun...Their troubles are only beginning. A new danger arises and Olivia's secrets are revealed. Can Cajun convince her to gamble on a mating so inconceivable it might just be a pairing that'll save the world? Or will all be lost?...or came with so much baggage.

I picked up a copy of this book at this tiny hole-in-the wall bar in a tiny town I can't even remember the name of. I feel like it referenced water somehow, something like Purple River, Orange Pond, something like that. Anyway, I probably should have just left it where it was, because I didn't really like it all that much.

Maybe I'm weird, but I never really understood the appeal of wolf shifters. I mean, they're just so freakin' hairy. Really, what is the appeal in that? Also, what happens if they shift mid-coitus, and why does that NEVER happen in a story? Am I really supposed to believe that at the height of passion these shifters don't lose control of themselves and shift? I just don't buy it.

So all that shifter nonsense aside, the chemistry between these two felt forced and unnatural (and that had nothing to do with the fact that Cajun is a freakin' wolf shifter). And I can usually accept the insta-love idea when shifters are involved, but Olivia should have felt it too, and it just didn't come across that way to me. And the idea that them doing the dirty would save the world is just absurd. Like seriously.

I wish I could recommend this book to you, but I just can't because I couldn't connect with any of the characters, and felt like they were forcing things that shouldn't have been forced. If you're really interested in a shifter book, I suggest looking elsewhere. 2 out of 5 stars.

Gracen is a hopeless daydreamer masquerading as a "normal" person in southern society. When not writing, she's a full-time mom for her two sons and a devoted wife to her real-life hero-husband. She has an unusual relationship with her muse, Dom, but credits all her creative success to his brilliant mind. She's addicted to writing, paranormal romance novels and movies, Alabama football and coffee...addictions are not necessarily in order of priority. She's convinced coffee is nectar from the gods and when blending coffee and writing together it generates the perfect creative merger. Many of her creative worlds are spawned from coffee highs and Dom's aggressive demands. To learn more about Gracen or to leave her a comment, visit her website at www.gracen-miller.com.

If you would like to read some legitimate reviews of Kissing Sassy, just click any of the following links.

Black Words-White Pages
Posted by Just Another Girl and Her Books at 2:27 PM