Reaping the Harvest by Robbie Cox 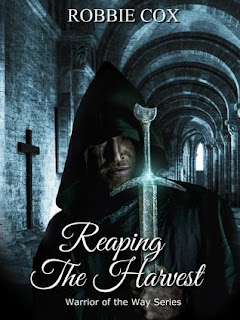 On his way home from a moving job, Rhychard Bartlett heard a scream and ran to help. That action changed his life forever and tossed him into a war between the Way and the Void. Given the Guardian Sword, assisted by an ellyll who only stands two feet tall, and bonded to a mind speaking coshey the size of a Newfoundland canine and a taste for pepperoni pizza, Rhychard must stop the demon Vargas from carrying out his plans. Once he finds out what they are, of course. In the meantime, he longs for the girlfriend who left him because he suddenly had too many secrets. Not only must he save the day, but he also must convince Renny Saunders he's not the cheating lover everyone thinks he is.

This book magically appeared on my bookshelf one day, I think. I don't know. Maybe I bought a copy of it at my thrift store and just forgot about it completely. That has certainly been known to happen before. In any case, one day it was on my bookshelf and I needed a book to read and decided to give this a shot.

Alright, so I think this story is about a man who travels between worlds, one that is like ours with smart phones and shit, and then one that's super medieval with swords and crap. But obviously he can't tell people about that because they'd think that he's freakin' crazy, because that's freakin' crazy.

This book has a whole lot of action, but I didn't really feel drawn into it. It was almost like I was watching from another world (you know, this one). I just don't think I'll be continuing reading this series after this because there just wasn't that much that appealed to me, and that's really weird because normally I would be super into anything remotely fantasy related. I think it's the fact that Rhychard was still trying to live his normal life too that really pulled me out of the fantasy of the story. It just didn't work for me.

If you're a fan of time-travel type stories, you'll probably like this book, but I just don't apparently. So I would suggest caution before starting this book, but that's just me. Obviously you can do whatever you want, especially if the book magically appears on your bookshelf. 2 out of 5 stars.

Robbie can be found on his back porch enjoying a cigar, a scotch, and a good story. He derives pleasure from his large family and his crazy group of friends that provide the inspiration for his blog The Mess that Is Me. He writes fantasy, erotica, mystery, and memoirs and when he is not writing, he is out Messing through adventures with those he cares about.

If you would like to read some legitimate reviews of Reaping the Harvest, just click any of the following links.

Paper Blog // Land of Niarg
Posted by Just Another Girl and Her Books at 2:46 PM