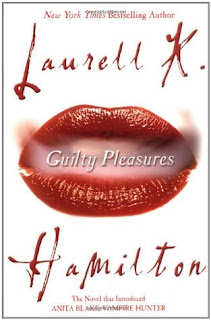 Anita Blake may be small and young, but vampires call her the Executioner. Anita is a necromancer and vampire hunter in a time when vampires are protected by law—as long as they don't get too nasty. Now someone's killing innocent vampires and Anita agrees—with a bit of vampiric arm-twisting—to help figure out who and why. Trust is a luxury Anita can't afford when her allies aren't human. The city's most powerful vampire, Nikolaos, is 1,000 years old and looks like a 10-year-old girl. The second most powerful vampire, Jean-Claude, is interested in more than just Anita's professional talents, but the feisty necromancer isn't playing along—yet. This popular series has a wild energy and humor, and some very appealing characters—both dead and alive.

A mysterious stranger gave me a copy of this book when I was living in a van down by the river. He said it would change my life. I don't want to say he was right, but about 2 minutes after I finished reading the book, I got a call on the cell phone that I didn't even know I owned offering me a job as Channing Tatum's personal baby oil applier. And the rest is history.

So the book itself got off to a really weird start. Like, I don't know why Anita Blake is a vampire hunter. It's not like Buffy who desperately needs to kill the vampire army that is being created in her hometown. Vampires are a protected endangered species in this story, so it's more like True Blood. I wanted to like her, but I don't like vampire hunters who don't kill vampires. If I was a vampire hunter, you better believe all those vampires would be dead, like dead dead. Stakes through the heart, garlic shoved in their mouths dead.

I tried really hard to picture myself in Anita's shoes, and I think I succeeded...I'm not sure why she raises the dead and hunts vampires in boots with six inch stiletto heels, but I put myself in them (and then proceeded to fall flat on my face because I just can't do six inch stiletto heels anymore.) If I could actually raise the dead, I would definitely use that power to terrorize ex boyfriends for...reasons. I feel like that was a missed opportunity for Anita.

Although the book was really just kind of meh for me, it DID change my life as promised, so it gets 3 out of 5 stars.

Laurell K. Hamilton is the #1 New York Times bestselling author of two series that mix mystery, fantasy, magic, horror and romance. Her Anita Blake: Vampire Hunter novels from Berkley Books began with GUILTY PLEASURES (now a hugely successful graphic novel from Marvel - the first sexy paranormal comic ever!) and continues with the SKIN TRADE, number seventeen in the series, in which Anita's complex personal and professional relationships with a master vampire and an alpha werewolf continue to evolve. There are now more than 6 million copies of Anita in print worldwide, in 16 languages. Hamilton's Ballantine series features Fey princess and private investigator, Merry Gentry and there are now six novels exceeding one million copies in print. Divine Misdemeanors, the eighth in the series will debut October 29, 2009. She lives in St. Louis County Missouri with her husband Jonathon Green, daughter, one pug dog and one boxer/pug dog.

If you would like to read some legitimate reviews of Guilty Pleasures, just click any of the following links.

Maryse's Book Blog // Love Vampires // Fangs for the Fantasy
Posted by Just Another Girl and Her Books at 5:57 AM 2 comments: