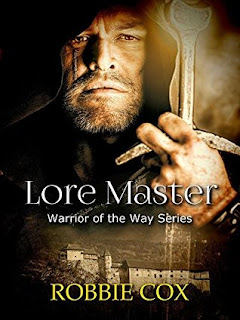 After the implosion of Harvest Fellowship, Rhychard is feeling lost without Renny. Luckily for him, the faerie world has calmed down some and he's been able to get back to a normal routine. That is, until Lore Master Taryen's apprentice shows up at his moving truck wanting to write down the history of his life. Calm is thrown out the window as Rhychard starts suffering from visions of fire that leave real burns on his body, gets visited by a dark elf that says he wants to help him stay alive, and now Rhychard is seeing…ghosts? So much for his normal routine.

I was at the local Renaissance festival this past fall when a rather skinny man with pointy ears shoved a copy of this book into my hands. I tried to pay for it, but he ran off without a word. I'm sure he was just one of the actors though, in costume for the faire and all that. I didn't really have any intention of actually reading the book, because my TBR list is eleventy million miles long, but it kept calling to me, and I finally stopped resisting when it said "Ye slatternly whore, ye cain't resist me forever." It was a pretty powerful argument.

Once I started reading this book, I couldn't put it down. I literally could not put the book down. It was attached to my hands as if by glue or something, which made going to the bathroom and feeding myself quite the trick. Thankfully the pages turned themselves so I didn't have to worry about that. But that gave me the incentive to get through the book quickly in the hopes that once I reached the end I'd be able to put it down. (I was, otherwise I would not be able to type this right now.)

I wish I could say that I was really drawn into the story, because it would have made reading it that much faster, but sadly that was not the case. See, that elf guy who gave me the book made a mistake in giving me the second book in a series, so I was completely lost for large portions of this book. There were so many things that I feel like I should have already been familiar with or known, that I just didn't. Honestly, what kind of idiot gives someone a book from a series and makes it not the first one?

Overall I give Lore Master 2.5 out of 5 stars. I really wanted to like the book, but I just couldn't.

To read some legitimate reviews of this book, just click any of the links below.

Terri Luvs Books
Posted by Just Another Girl and Her Books at 7:10 PM