Jude the Obscure by Thomas Hardy 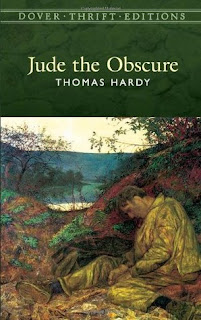 In 1895 Hardy's final novel, the great tale of Jude The Obscure, sent shockwaves of indignation rolling across Victorian England. Hardy had dared to write frankly about sexuality and to indict the institutions of marriage, education, and religion. But he had, in fact, created a deeply moral work. The stonemason Jude Fawley is a dreamer; his is a tragedy of unfulfilled aims. With his tantalizing cousin Sue Bridehead, the last and most extraordinary of Hardy's heroines, Jude takes on the world and discovers, tragically, its brutal indifference. The most powerful expression of Hardy's philosophy, and a profound exploration of man's essential loneliness, Jude The Obscure is a great and beautiful book. 'His style touches sublimity.'—T.S. Eliot.

I bought a copy of this book because I heard from some very smart people that it's the biography of Joood - Hooligan from Platypire reviews. Clearly she changed the spelling of her name some, but that makes sense for anonymity purposes and all that. And I know what you're thinking, this book was written in the late 1800s, it couldn't possibly be about someone as young as Joood - Hooligan, but obviously you're not aware that she's a Time Lord and can't be bothered with all that wibbly wobbly timey wimey stuff. Proof that she's a Time Lord? When this book was written about her, she was a he. It's pretty obvious if you ask me.

Now I spent a fair amount of time trying to figure out why a Time Lord would allow someone to write a biography about them, even someone as exalted as Thomas Hardy, but it soon became clear that the autobiography is full of holes, because Jude was not really well known back then (which makes it even stranger that someone would want to write a biography about her/him in the first place, but I guess maybe s/he told Thomas some rather interesting stories that just didn't make it into the book). If you ask me, Jude comes across as a rather boring and very uninteresting character, which aside from the Time Lord thing completely matches up with my feelings about her/him in this time. I mean, s/he's on a quest for platypire world domination (which s/he obviously started in the late 1800s), but basically no one of importance even knows s/he exists. S/he probably should have chosen any other moniker than obscure back when s/he was palling around with Hardy. I mean, that's a real rookie mistake right there.

In the end, I feel that this has given me some new insight into Jude, which will come in handy for my future plots against her/him, but this book was a real bore to read. I cannot recommend it, unless you wish to join me in defeating her/him, in which case, study this book, and then get back to me.

I give Jude the Obscure two Daleks.

Thomas Hardy, OM (2 June 1840 – 11 January 1928) was an English novelist and poet. A Victorian realist, in the tradition of George Eliot, he was also influenced both in his novels and poetry by Romanticism, especially by William Wordsworth. Charles Dickens is another important influence on Thomas Hardy. Like Dickens, he was also highly critical of much in Victorian society, though Hardy focused more on a declining rural society.

ProSe // Mugglenet.com // That's What She Read
Posted by Just Another Girl and Her Books at 2:19 AM