The Bone Season by Samantha Shannon 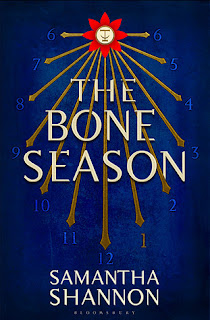 The year is 2059. Nineteen-year-old Paige Mahoney is working in the criminal underworld of Scion London, based at Seven Dials, employed by a man named Jaxon Hall. Her job: to scout for information by breaking into people's minds. For Paige is a dreamwalker, a clairvoyant and, in the world of Scion, she commits treason simply by breathing.It is raining the day her life changes for ever. Attacked, drugged and kidnapped, Paige is transported to Oxford – a city kept secret for two hundred years, controlled by a powerful, otherworldly race. Paige is assigned to Warden, a Rephaite with mysterious motives. He is her master. Her trainer. Her natural enemy. But if Paige wants to regain her freedom she must allow herself to be nurtured in this prison where she is meant to die.The Bone Season introduces a compelling heroine and also introduces an extraordinary young writer, with huge ambition and a teeming imagination. Samantha Shannon has created a bold new reality in this riveting debut.

I got a copy of this book in the mail, and while it was probably just a simple computer error or something, the postmark indicated that it was sent in January of 2061, but that's impossible because it's only 2017 now.

I had a really hard time getting into this book at first, because I kept getting distracted by the excessive use of italics on words. It seemed like there was at least one word italicized on every single page, and some pages had more than one. I'm a big fan of using italics to add emphasis to words, but when you're italicizing that much, the emphasis disappears.

But then I started to really pay attention to the italics, and I realized that they were part of a secret message. Someone is very clearly trying to warn us of dangers in the future. I don't want to give away the whole secret, because I don't want the powers that be to know that we're on to their plan, but there will be mime-crimes, epidemics, invasions, death, and safe insanity. Just be on the lookout for it, because it's coming y'all. This book says so in it's secret message. Once I realized that this book contained a secret message from the future, it got so much more engaging.

Overall I give this book 4 out of 5 future stars.

Samantha Shannon was born and raised in West London. She started writing in abundance when she was twelve, started her first novel when she was fifteen, and studied English Language and Literature at St Anne's College, Oxford, from 2010 – 2013, graduating with a 2:1.In 2013, she published The Bone Season, the internationally bestselling first installment in a seven-book series of fantasy novels. Its first sequel, The Mime Order, was published in 2015, and she's currently editing the third book in the series, The Song Rising. She is also working on a high fantasy novel. Film rights to the Bone Season are held by the Imaginarium Studios, Chernin Entertainment and 20th Century Fox.

If you would like to read some legitimate reviews of The Bone Season, just click any of the following links.

The Guardian // A Dribble of Ink // Fantasy Book Review
SaveSave
Posted by Just Another Girl and Her Books at 8:14 AM