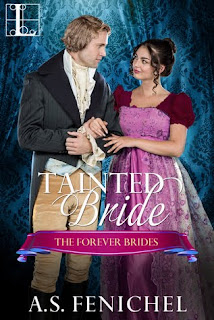 Only trust can save her…. Sailing to London, Sophia Braighton only hopes to escape certain ruin. But when she arrives, her Great Aunt Daphne has other plans for the American-born beauty. Determined to marry off her niece to a man of means, she propels Sophia into London society, not knowing that the young woman’s trust in men is shattered. In fact, Sophia never expects to ever feel anything for a man. Then again, she never expects to find herself in the company of the dashing earl of Marlton….From the moment he sees Sophia, Daniel Fallon feels alive in a way he has not since his broken engagement. Though the vulnerable beauty shies from the passion burning bright between them, Daniel is determined to court her and make her his bride. And when he learns of the painful secret she harbors, he is equally determined to take revenge on the man responsible. But will the quest destroy him—and his future with his beloved?

I picked up a copy of this book for a quarter at my libraries yearly shelf clearing sale. I was a bit surprised that they even had a copy for sale so soon after it's release, but apparently it wasn't very popular because it was in pristine condition. Maybe I should actually check books out at the library every once in a while instead of just raiding their sales.

There were times while I was reading this, where I felt like this was basically my life story. For starters, I had to flee America and head to Europe to preserve my reputation when I found out I was pregnant from an illicit affair with my husband that would have led to almost certain ruin if anyone had found out. At least in Europe I could lie and tell people that I had been married and that my poor husband had passed away before he ever got to meet the baby, whereas every single person in America would have known my shame immediately.

I hadn't been living in Europe long when I realized that I would need to find a wealthy benefactor to help me maintain the quality of life that I believe a princess like myself deserves, so I bought a fancy dress and hit the ball scene hard. Let me tell you, ball crashing is way harder than Vince Vaughan and Owen Wilson make wedding crashing look. Everyone wants to know who your father is and if he knows the Queen of England and stuff, and somehow they all freakin' know each other already, so I don't know why they ask questions that they already know the answers to. But I eventually met with some measure of success when a newly knighted nobleman arrived late to a ball to see me being tossed out and took pity on me. We went for greasy hamburgers and fries, and have been together for the past six years. I'm even almost ready to tell him about my daughter. It's getting really hard keeping her a secret.

So really, I just couldn't enjoy this story too much because it brought back so many painful memories for me. And for that, I give it 2 too-tight corsets.

A.S. Fenichel (Andrea) gave up a successful IT career in New York City to follow her husband to Texas and pursue her lifelong dream of being a professional writer. She's never looked back. Andrea adores writing stories filled with love, passion, desire, magic and maybe a little mayhem tossed in for good measure. Books have always been her perfect escape and she still relishes diving into one and staying up all night to finish a good story.She is currently writing Regency romance for Kensington Publishing and you can learn more about Andrea's books at http://asfenichel.com or visit her on her Facebook page, where she spends entirely too much time. https://www.facebook.com/A.S.Fenichel. Originally from New York, she grew up in New Jersey, and now lives in the East Texas with her real life hero, her wonderful husband, a fussy cat and a demanding dog. When not reading or writing she enjoys cooking, travel, history, and puttering in her garden.

If you would like to read some legitimate reviews of Tainted Bride, just click any of the following links.

Whiskey With My Book // The Good, The Bad and the Unread  Fresh Fiction
Posted by Just Another Girl and Her Books at 7:26 AM