His Obsession by J.L. Beck 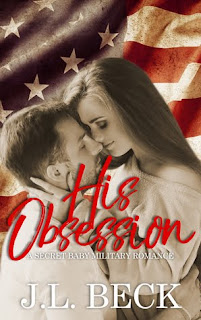 “She hid my daughter from me for four long years, and now I have to piece her heart back together to win her back.” Four years ago Jake left to defend his country, leaving behind the love of his life. Four years later he returns to that woman, who now has a child, and life of her own. Jake knows he should move on but he can’t. He’s obsessed with Mia and the need to make her his again. Until she tells him her secret causing his world to flip upside down. Love can endure anything if it’s real, right? Now all Jake must do is win back Mia’s heart so he can give her the happily ever after he knows they both deserve. WARNING: Instalove themes rule this book. There’s also an alpha that refuses to take no for an answer, and a secret baby romance, with a happily ever after sweet enough to melt your heart.

This book was recommended to me by a member of my FRG. She said it was like Army Wives in book form. Why I thought that was a good recommendation, I do not know, but I decided to give it a chance. Big mistake on my part. That is three hours of my life I will never get back.

First of all, Jake is a putz. Any woman that moves on when the man she's been boinking joins the military is not worth fighting for. Seriously, if Mia wanted to be with him, she wouldn't have kept the baby a secret. It's not like military personnel don't have any contact with people while they're in service, and after basic training, Jake and Mia could have been together except for when he was deployed, but at most that would account for two of his four years of service. So yeah, the premise of the story was just dumb to begin with, and so was Jake for not taking the hint in the first place.

Don't even get me started on the damn alpha nonsense. There's a fine line between persistence and harassment, and Jake did the long jump over it. Seriously dude, no means no. I mean, sure, you deserve the opportunity to be in your kids life, but that is something you need to take to court or mediation. I wish Mia would have gotten a restraining order against his punk ass.

Normally when I read a romance, I'm all about getting the HEA, but this is one book where I really wanted them to not end up together at all. I don't think I've ever read about two people who are less suited to be together than Mia and Jake. I'm just saying there's a reason they didn't stay in contact while he was in the military.

Overall I give this book one steaming pile of poo. And I will never take another book recommendation from anyone at the FRG again.

J.L. Beck is the author of over thirty different novels, and novellas. She resides in Wisconsin with her two children and husband. When she's not reading, or writing you can find her shopping, catching up on her favorite tv shows or spending time with her loved ones. J.L. writes steamy romance with alpha males, strong heroines, and instalove that always comes served with a happily ever after.

If you would like to read some legitimate reviews of His Obsession, you'll just have to check Goodreads because I couldn't find any blog reviews through Google.

Posted by Just Another Girl and Her Books at 11:43 AM