Gameboard of the Gods by Richelle Mead 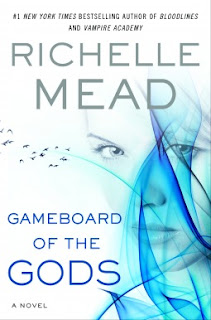 In a futuristic world nearly destroyed by religious extremists, Justin March lives in exile after failing in his job as an investigator of religious groups and supernatural claims. But Justin is given a second chance when Mae Koskinen comes to bring him back to the Republic of United North America (RUNA). Raised in an aristocratic caste, Mae is now a member of the military’s most elite and terrifying tier, a soldier with enhanced reflexes and skills.When Justin and Mae are assigned to work together to solve a string of ritualistic murders, they soon realize that their discoveries have exposed them to terrible danger. As their investigation races forward, unknown enemies and powers greater than they can imagine are gathering in the shadows, ready to reclaim the world in which humans are merely game pieces on their board.Gameboard of the Gods, the first installment of Richelle Mead’s Age of X series, will have all the elements that have made her YA Vampire Academy and Bloodlines series such megasuccesses: sexy, irresistible characters; romantic and mythological intrigue; and relentless action and suspense.


I found a copy of this book at my local comic book store, which initially seemed like a really weird place for it and me to be. But I thought the cover was pretty, so I picked it up anyway while I was there because heaven forbid I have to go back to a comic book store.

When I started reading this book, I found that it hit a little too close to home with the current political climate. I'm pretty sure the world is one Trump Twitter rant away from annihilation, and I think we all know that he's widely supported by right-wing Christian extremists. How they can support a man who goes against pretty much everything that Christ talked about I do not know, but I guess as long as he's against the gays and probably against abortion, it's all good.

So anyway, I'm reading about this world that I'm pretty sure I'll be inhabiting in just a few years in real life, and it started to give me legit nightmares. I can't sleep for more than two to three hours at a time anymore without waking up in a cold sweat, panicking, and wondering where my next meal is going to come from (the pantry, in real life I have a well-stocked pantry, but in the nightmares food is very, very scarce).

So I don't recommend this book to anyone that is less than happy about the current occupant of the White House because it will likely give you nightmares as well. Don't say I didn't warn you.

Richelle Mead is an international bestselling author of over twenty-five books for both adults and teens. Her Georgina Kincaid and Dark Swan series take a witty but edgy look at the paranormal while her sci-fi Age of X series shows us a future with no religion. Over on the young adult side, Richelle has written the much-acclaimed Vampire Academy series and its spin-off, Bloodlines, about a secret society keeping the vampire world hidden from humans. Her latest project, The Glittering Court, takes place in a fantasy world inspired by colonial America, following the adventures of three impoverished girls trained up to be "ladies" who can make advantageous marriages in a dangerous new world across the sea.Richelle's books have been on the New York Times and USA Today bestseller lists and received honors from the American Library Association. Her books have been translated into over two dozen languages, as well as adapted into graphic novels. In 2014, Vampire Academy was made into a feature film. A lifelong reader, Richelle loves mythology and wacky humor. When not writing, she can be found spending time with her family, buying dresses, and watching bad reality TV. More at: www.richellemead.com

If you would like to read some legitimate reviews of Gameboard of the Gods, just click any of the following links.

Caroline Andrus Blogger // Fantasy Book Critic // Not Yet Read
Posted by Just Another Girl and Her Books at 2:50 PM