The Haters by Jesse Andrews 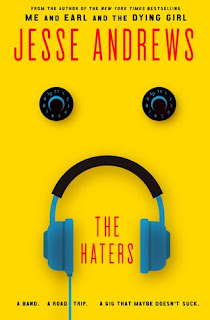 From Jesse Andrews, author of the New York Times bestselling Me and Earl and the Dying Girl and screenwriter of the Sundance award–winning motion picture of the same name, comes a groundbreaking young adult novel about music, love, friendship, and freedom as three young musicians follow a quest to escape the law long enough to play the amazing show they hope (but also doubt) they have in them.Inspired by the years he spent playing bass in a band himself, The Haters is Jesse Andrews’s road trip adventure about a trio of jazz-camp escapees who, against every realistic expectation, become a band. For Wes and his best friend, Corey, jazz camp turns out to be lame. It’s pretty much all dudes talking in Jazz Voice. But then they jam with Ash, a charismatic girl with an unusual sound, and the three just click. It’s three and a half hours of pure musical magic, and Ash makes a decision: They need to hit the road. Because the road, not summer camp, is where bands get good. Before Wes and Corey know it, they’re in Ash’s SUV heading south, and The Haters Summer of Hate Tour has begun.In his second novel, Andrews again brings his brilliant and distinctive voice to YA, in the perfect book for music lovers, fans of The Commitments and High Fidelity, or anyone who has ever loved—and hated—a song or a band. This witty, funny coming-of-age novel is contemporary fiction at its best.


This one time, at band camp, I found a copy of this book in the dorm room I was staying in for the duration of camp, and even though I was spending twelve hours a day at practice for our concert at the end of the week, I found some time to read it.

I tried to relate to this book, but I had a hard time with that. This is probably due to the fact that I hated my time playing in a jazz band. Granted, my dumb band director at the time made me switch from clarinet to tenor sax (we had way too many clarinet players in band that year, we outnumbered every other section of the band something like 5 to 1), and my diaphragm and lungs were just not prepared for the requirements of tenor sax. That didn't matter to the band director though, as long as he got his jazz band. Although I guess in that respect, I could relate to wanting to get away from a crappy band experience, but I never would have gone to jazz camp to begin with. Lame.

Beyond that, I found it highly unlikely that there was only one girl in attendance at jazz camp in the first place. It just wasn't realistic at all. In my experience, girls typically outnumber boys at band camp by a slight margin, granted it wasn't jazz band, but in high school, girls are just as likely to play in jazz band as concert band or marching band. So I just couldn't buy the premise of this book at all.

I give this book 2 off-key tenor sax's.

Jesse Andrews is the author of the New York Times best-selling novel Me and Earl and the Dying Girl (Abrams Books, 2012). He is also the writer of the feature-film adaptation of his own book, also entitled Me and Earl and the Dying Girl, the winner of both the Grand Jury Prize and the Audience Award at the 2015 Sundance Film Festival. It was released in theaters in summer 2015 and is now available on DVD, Blu-Ray, and digital HD.His second book, The Haters, will be published in 2016 by Abrams Books. He continues to write both books and screenplays.He was born and raised in Pittsburgh, PA, and is a graduate of Schenley High School and Harvard University. He currently makes his home in Boston, MA.

If you would like to read some legitimate reviews of The Haters by Jesse Andrews, just click any of the following links.

Kirkus Reviews // Pop Crush // Reading with Jenna
Posted by Just Another Girl and Her Books at 2:07 PM