Girl on the Brink by Christina Hoag 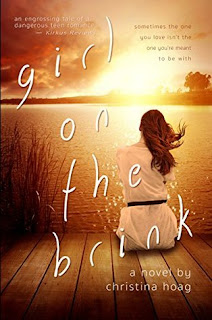 He was perfect. At first. The summer before senior year, 17-year-old Chloe starts an internship as a reporter at a local newspaper. While on assignment, she meets Kieran, a quirky aspiring actor. Chloe becomes smitten with Kieran’s charisma and his ability to soothe her soul, torn over her parents’ impending divorce. But as their bond deepens, Kieran becomes smothering and flies into terrifying rages. He confides in Chloe that he suffered a traumatic childhood, and Chloe is moved to help him. If only he could be healed, she thinks, their relationship would be perfect. But her efforts backfire and Kieran becomes violent. Chloe breaks up with him, but Kieran pursues her relentlessly to make up. Chloe must make the heartrending choice between saving herself or saving Kieran, until Kieran’s mission of remorse turns into a quest for revenge.


I'm not really sure how I ended up with a copy of this book. I probably picked it up at my thrift store one day because I liked the cover and thought the title was intriguing. In any case, it was on my bookshelves and therefore it needed to be read at some point.

Chloe reminded me of myself at seventeen. While I wasn't working as a reporter, I was the proofreader for my mother's tourism newspaper (and often the photographer as well, although she never gave me personal credit for my pictures). I even started dating my first boyfriend the summer before my senior year of high school, and he pretty much swept me off my feet on our first date. Fortunately for me, that's where his similarities to Kieran stop (I did encounter other aspects of Kieran's personality in future paramours, but never all wrapped up into one person).

It was hard for me to really imagine myself in Chloe's shoes because my rage-y relationship was ended very quickly after I found out that was a thing he would do, and that happened early enough in our relationship I wasn't even considering him my boyfriend yet, which made it super easy to cut him loose on my end. And because he was a soldier getting ready to PCS to a new duty station, the Army took care of keeping him away from me. I do understand why it was harder for Chloe to end her relationship than it was for me to end mine, but it was still hard to fully feel those feelings myself.

Overall I give Girl on the Brink 4 broken hearts.

As a journalist, Christina Hoag was threatened by a killer's girlfriend, had her laptop searched by Colombian guerrillas and phone tapped in Venezuela, was suspected of drug trafficking in Guyana, hid under a car to evade Guatemalan soldiers, and posed as a nun to get inside a Caracas jail. She's interviewed gang members, bank robbers, gunmen, thieves and thugs in prisons, shantytowns and slums, not to forget billionaires and presidents, some of whom fall into the previous categories. Now she prefers to write about such characters in her fiction.Kirkus Reviews praised Christina as a “talented writer” in her "Skin of Tattoos," a noir crime novel. Her thriller "Girl on the Brink" was named to Suspense Magazine’s Best of 2016 YA list. She also co-authored "Peace in the Hood: Working with Gang Members to End the Violence," a groundbreaking book on violence intervention used in several universities. Christina grew up as an expat around the world. She resides in Los Angeles and teaches creative writing at a maximum-security prison and has mentored at-risk teen girls in creative writing in South and East Los Angeles. Find her on the web at www.christinahoag.com; https://facebook.com/ChristinaHoagAuthorhttps://twitter.com/ChristinaHoag and https://www.instagram.com/ChristinaHoagAuthor

If you would like to read some legitimate reviews of Girl on the Brink, just click any of the following links.