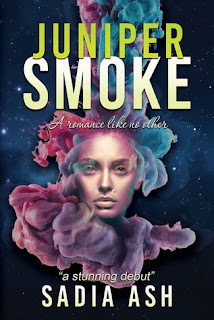 In an age of casual hook-ups, can love survive the test of time?Juniper and Kyle meet when she is dangling forty feet from a museum scaffolding. Juniper Mills is a straitlaced but sassy curator at a History Museum. Raised by her mother to hate men, she worries she’ll die a frigid scholar in a musty house with an army of cats and a lake of books.Kyle Paxton is an intense and intimidating inventor of a successful micro camera from San Francisco. He schedules dating like his work—with robotic precision. This helps him cope with the dark memories of his ex-girlfriend, who still haunts him. Not looking for love, he only hooks up with Amazonian models. When he joins the museum board, Juniper falls for him. She wants him, but knows it's going to be as hard as catching the ocean in a teacup. Juniper becomes Kyle’s obsession, but the tragic secrets of his past cloud his feelings. Juniper manages to knock Kyle’s world off its axis and their galaxies collide in this very unfairy tale. But can they overcome their differences and stop a hateful and vindictive person from tearing them apart?Juniper Smoke is a smoking hot read with fun twists, dark secrets and edge-of-your-seat drama. Nothing is as it seems and no one behaves as you would expect.

When I visit museums, I like to buy a book from the gift shop, and at one museum I visited, this book seemed far more interesting than any of the boring old exhibits that I saw in the museum itself, so I was able to maintain my trend of buying a museum book without actually buying a book featuring the boring things from the museum. This book basically seemed like a godsend at the time. But boy was I wrong about that.

I thought that I was going to really like this book based on the cover, because it's freaking badass. Unfortunately that's the only thing about this book that is badass. The main character, Juniper, is a mass of crazy contradictions. I mean she's supposed to be this chick that hates men, but she's worried about ending up alone AND gets a crush on the practically unavailable new guy? Yeah, no. That's not how hating men works. She clearly needs to take some more lessons from the feminazis around her if she thinks she's feministing right. I was just super disappointed in her portrayal of feminism.

And then there's Kyle, who joins the board of directors for a museum and starts obsessing over one of the employees. I'm pretty sure that's against about a bajillion rules. It's at least a major conflict of interest. I really don't blame the person that was trying to keep them apart, because that was the right thing to do.

I give this 2.5 ancient Egyptian vases.

Sadia Ash is an art and history obsessed geek who loves all things British and literary. She has held jobs that always involved writing (and never math) in some way. She is currently working on two other novels and a film script. She lives in sun-drenched Cali with her husband and two bright kids.

If you would like to read some legitimate reviews of Juniper Smoke, just click any of the following links.

Schmexy Girl Book Blog // Chasing Away Reality // The Book Bellas
Posted by Just Another Girl and Her Books at 12:48 PM