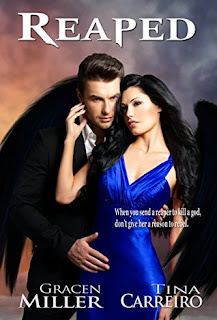 WARNING: This is a work of fiction. Reaped is told through the eyes of the dark side. We understand the mythical and religious spin within this book may be hard for some to read. So if you fit that mold, please don’t be tempted to open the book. If suspending belief is something you have a hard time with when religious aspects are involved, please refrain from reading. This work of fiction is not to be taken seriously. This book was written from our creative view and intended for entertainment purposes only. The book was not written to be incendiary or inflammatory. So before you pass judgment, remember, that’s reserved for God. God ordered her to reap him… Forged by her father’s hand to reap at His command, Solas was God’s most skilled Reaper. Killing on command, she had never questioned His directives—until now. Too bad Loki’s heart isn’t as black as she’s been led to believe. That would make her job easy. But she cannot dismiss the goodness she senses inside him. Bewildered by her attraction to Loki, she still craves returning home, but knows the only way back into her homeland is to obey God’s order. As the lines between allies and enemies are blurred, she questions who is weaving the biggest deception… the legendary trickster god or her own father? But she can’t bring herself to swing her blade. From the moment she fell at his feet, Loki mistrusted Solas. His intentions were simple, to use her and send her on her way. Then he discovered she was cast out of her homeland after defying her father’s order to reap him. Intrigued by a woman that would stand against the supreme God, Loki offers her his temporary protection while nursing his skepticism. Many warriors from the heavens have been sent to kill him, but only one has come this close. She’s the perfect weapon. A threat not just to his life, but also to his family and everything he stands for. He should take her life, but he craves protecting her and the secret she harbors more. When you send a reaper to kill a god, don’t give her a reason to rebel. A tentative alliance between Loki and Solas is brokered, but misunderstandings strain their fragile relationship. Battles are won and lost, but can Solas escape her father’s will? Faced with hard choices, Loki will have to decide what’s important to him. Or can he pull off the ultimate trick and win their freedom?

My church's youth group has been actively campaigning to get this book banned everywhere, so I knew that I needed to read it before they succeed (and they will because they always do). It was not easy to sneak a copy of the book into my house because my parents are always checking what I'm reading and looking through my drawers and stuff, so while I was reading this book, I made sure to hide it in my older sister's room, that way if it was found, she'd get in trouble for it and not me.

After reading this book, I must say that I completely understand why my youth group is working to get it banned. I was absolutely scandalized that the authors would glorify something that so clearly breaks one of the ten commandments! I want to ask them if they want to go to Hell when they die, because that's how you get sent to Hell when you die. Then on top of the fact that they're basically worshipping another God, they added kinky romance to the story. Everyone knows that angels are pure spirits and not kinky. This book is just an absolute abomination all the way around, and I'm sorry I read it. I'm going to have to confess my sin, and I will accept my penance, no matter how harsh it may seem, because I know I deserve it and will do whatever it takes to keep from being sent to Hell with these authors.

I give Reaped, 1 million Hail Mary's, because that's how many the authors will have to say to redeem their immortal souls after writing this book.

I was unable to find any blog reviews for Reaped, so you will just have to check out reviews on Amazon or Goodreads for some legitimate reviews.
Posted by Just Another Girl and Her Books at 11:54 AM