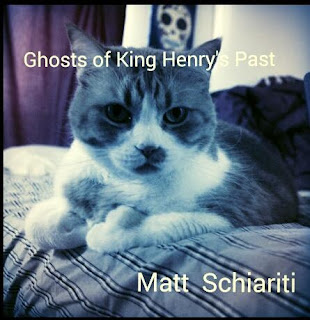 Seth Gabriel thought life would get easier for him after dealing with his little demon issue a few years ago. Although his life wasn't exactly what he had thought it would be by this age, it was pretty good.
That is, until Jamie brought home the weirdest looking cat he'd seen in his life. (The thing had like 5 extra toes or something!) But that wasn't even the worst of it. The cat was King Henry, and not just in name. The thing was possessed by the ghost(s, he wasn't exactly sure) of at least one of the dead monarchs.

When cats start showing up in his backyard headless, Seth knows he needs to exorcise the ghosts from his new pet, or face the wrath of the neighborhood. But will King Henry be the same without his ghostly guests?

I hacked into the author's computer to obtain a copy of this book (don't ask me to send it to you because THAT would be unethical.) There were just so many hints and whispers about it's existence that I just had to know what all the hype was about. And boy am I glad I did.

This book had it all! Ghosts, cats, attempted exorcism. It was almost like a full on Chuck Tingle experience without all the gay sex. What more could a girl ask for (aside from a million dollars, a mansion, and enough diamonds to fill an Olympic-sized swimming pool, but I don't see any of those things happening for me any time soon.)

This story really sucked me in. The idea that the name you can choose for your pets can influence their behavior, and possibly invite in unwanted "guests" was unique and intriguing. It kind of makes me regret naming my cat Attila the Hun. But it also made a certain amount of sense, and the way it was woven into the story was masterful. Matt Schiariti is truly a word magician.

And then the ending, y'all, it broke my freakin' stone cold heart. I don't want to say too much because spoilers, but there was definitely a river of tears that the dams of a hundred beavers couldn't even stop. Just buy stock in Kleenex and have your tissues handy.

Overall Ghosts of King Henry's Past gets one million stars because it was just that good.

To purchase a copy of this book, you will have to go post on Matt Schiariti's Facebook page letting him know that you want this book. Make sure you let him know that King Henry sent you.
Posted by Just Another Girl and Her Books at 4:37 PM