Rarity from the Hollow by Robert Eggleton 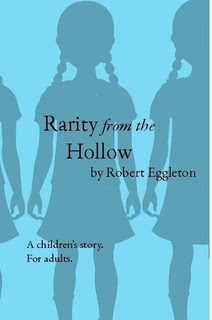 Lacy Dawn's father relives the Gulf War, her mother's teeth are rotting out, and her best friend is murdered by the meanest daddy on Earth. Life in The Hollow isn't great. But Lacy has one advantage -- she's been befriended by a semi-organic, semi-robot who works with her to cure her parents. He wants something in exchange, though. It's up to her to save the Universe. To prepare Lacy for her coming task, she is being schooled daily via direct downloads into her brain. Some of these courses tell her how to apply magic to resolve everyday problems much more pressing to her than a universe in big trouble, like those at home and at school. She doesn't mind saving the universe, but her own family and friends come first. Will Lacy Dawn's predisposition, education, and magic be enough for her to save the Universe, Earth, and, most importantly, protect her own family? Rarity from the Hollow is adult literary science fiction filled with tragedy, comedy and satire. It is a children's story for adults, not for the prudish, faint of heart, or easily offended.

I found a copy of this book while I was dumpster diving last Saturday. I find the mostly blue cover to be very appealing since blue is my favorite color and I always find myself drawn to blue things (that's really the only reason I even took the book from the dumpster. I do have some standards.)

This book was bizarre. Honestly, it was crazier than Tom Cruise jumping on a couch to proclaim his love for Katie Holmes on Oprah, and I think we all know how crazy that was! Every time I thought I was finally getting a handle on what was going on, the story went off in some new, weird direction and I was left to try to find my bearings once again. I don't normally get motion sick, but all these loops made me want to vomit.

On top of that, this book was just really out of this world, and not in a good, the Force is with you, kind of way either. It was more of a you're a janitor who just accidentally launched yourself in a spaceship, knocking out communications with NASA in the process kind of way. An intergalactic train wreck if you will.

Overall I give Rarity From the Hollow 2 out of 5 stars (it's got that blue cover going for it after all.)

Robert Eggleton has served as a children's advocate in an impoverished state for over forty years. He is best known for his investigative reports about children’s programs, most of which were published by the West Virginia Supreme Court where he worked from 1982 through 1997, and which also included publication of models of serving disadvantaged and homeless children in the community instead of in large institutions, research into foster care drift involving children bouncing from one home to the next -- never finding a permanent loving family, and statistical reports on the occurrence and correlates of child abuse and delinquency. Today, he is a recently retired children's psychotherapist from the mental health center in Charleston, West Virginia, where he specialized in helping victims cope with and overcome physical and sexual abuse, and other mental health concerns. Rarity from the Hollow is his debut novel and its release followed publication of three short Lacy Dawn Adventures in magazines: Wingspan Quarterly, Beyond Centauri, and Atomjack Science Fiction. Author proceeds have been donated to a child abuse prevention program operated by Children’s Home Society of West Virginia. http://www.childhswv.org/ Robert continues to write fiction with new adventures based on a protagonist that is a composite character of children that he met when delivering group therapy services. The overall theme of his stories remains victimization to empowerment.

If you would like to read some legitimate reviews of Rarity from the Hollow, just click on any of the following links.

Moxxley @Platypire Reviews // Calliope the Book Goddess // The Scary Reviews
SaveSaveSaveSave
Posted by Just Another Girl and Her Books at 8:26 PM