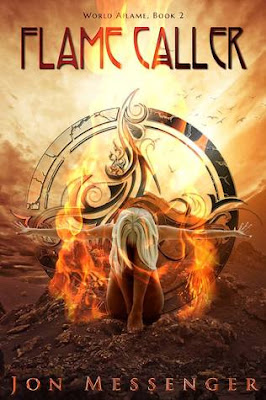 THE EARTH GIVES WAY TO THE SEA,THE SEA BOWS BEFORE THE WIND,THE WIND FEEDS THE FLAME,THE FLAME BURNS THE WORLD OF MAN DOWN TO THE EARTH.White Halls is no longer a sleepy little town. Its houses lie smoldering on their foundations. The residents take refuge in their homes, afraid to leave. And the town’s prodigal son and newest Wind Warrior, Xander Sirocco, has fled.Xander survived the first assault on his life by the Flame Caste, but it’s at a great personal cost. He and Sammy are left to bury his family and tend to his grandfather, who lies in a coma.With the weight of the world on his shoulders, he can’t help but feel the fight against the Fire Caste is hopeless. It seems that way, that is, until he learns of a secret race of Elementals, embodiments of the elemental powers that the different castes wield. With the power of the Elementals comes a chance to save not just the Wind Warriors and Sammy, but the world itself.Emboldened, he sets off to find the Wind Elemental and with it, the hope for his survival. Too bad no one has seen the Wind Elemental in generations and now thinks she’s just a myth. As he quickly learns, however, the Fire Elemental isn’t a myth. It’s real and it has a secret plan for his girlfriend. And it won’t stop until Xander is dead.

So I went to the store the other day to pick up a 36 count package of Jimmy Dean sausages, and all I ended up getting was this book. I tried to feed it to my husband for breakfast, and he was just not having it, so I decided to read it instead. Sure, the page edges were a little crispy after frying, but I feel like that just added to the aesthetic of the book.

I was expecting this book to have a lot more death in it than it did. The biggest disappointment is that there were no Katie deaths in this book, and books in which a Katie dies are far superior to other books, in my opinion. I'm also a bit disappointed that there weren't more people running around in flames. A couple major missed opportunities there.

Overall, I give Flame Caller 3 out of 5 stars, because even though it was better as a book than as a 36 count package of sausages, it was only kind of meh because of the lack of people in flames and people named Katie dying.


Jon Messenger (Born 1979 in London, England) serves as an United States Army Major in the Medical Service Corps. Since graduating from the University of Southern California in 2002, writing Science Fiction has remained his passion, a passion that has continued through multiple combat and humanitarian deployments. Jon wrote the "Brink of Distinction" trilogy, of which "Burden of Sisyphus" is the first book, while serving a 16-month deployment in Baghdad, Iraq.

If you would like to read some legitimate reviews of Flame Caller, simply click any of the links below.

Drue's Random Chatter's Reviews // One Guys Guide to Good Reads
SaveSave
Posted by Just Another Girl and Her Books at 7:44 PM