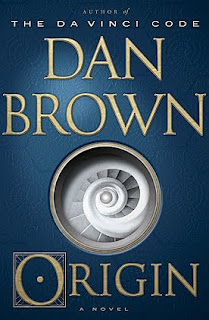 Robert Langdon, Harvard professor of symbology and religious iconology, arrives at the ultramodern Guggenheim Museum in Bilbao to attend a major announcement—the unveiling of a discovery that “will change the face of science forever.” The evening’s host is Edmond Kirsch, a forty-year-old billionaire and futurist whose dazzling high-tech inventions and audacious predictions have made him a renowned global figure. Kirsch, who was one of Langdon’s first students at Harvard two decades earlier, is about to reveal an astonishing breakthrough . . . one that will answer two of the fundamental questions of human existence.
As the event begins, Langdon and several hundred guests find themselves captivated by an utterly original presentation, which Langdon realizes will be far more controversial than he ever imagined. But the meticulously orchestrated evening suddenly erupts into chaos, and Kirsch’s precious discovery teeters on the brink of being lost forever. Reeling and facing an imminent threat, Langdon is forced into a desperate bid to escape Bilbao. With him is Ambra Vidal, the elegant museum director who worked with Kirsch to stage the provocative event. Together they flee to Barcelona on a perilous quest to locate a cryptic password that will unlock Kirsch’s secret.
Navigating the dark corridors of hidden history and extreme religion, Langdon and Vidal must evade a tormented enemy whose all-knowing power seems to emanate from Spain’s Royal Palace itself . . . and who will stop at nothing to silence Edmond Kirsch. On a trail marked by modern art and enigmatic symbols, Langdon and Vidal uncover clues that ultimately bring them face-to-face with Kirsch’s shocking discovery . . . and the breathtaking truth that has long eluded us.

I found a copy of this book abandoned in a locker at a train station when I was on my way to Barcelona. There was a post-it note on it, but it was written in Spanish, so I haven't a clue what it said, but I assume it was "Free for whoever wants this book." It was a rather handy find as I had forgotten to bring a book with me, and had a rather long train ride to look forward to.

So long story short, I spent my train ride reading this book. It had me so enthralled that I almost missed both of my connecting stops (I didn't, but I almost did). Anyway, by the time I got to Barcelona I'd finished reading the book and it was a rollercoaster. But then, I got off the train and there was a dude there holding a sign with MY name on it. Now, I wasn't expecting to be meeting anyone there, and dude looked kind of sketchy so I pretended to be a Russian prostitute to evade his attention. It totally would have worked too if stupid Becky Johnson from high school hadn't been at the train station and called out my name when she spotted me. Since the jig was up, I was left with no choice but to run as if there were bulls chasing me.

So I ran up and down tiny side streets and alleys that were barely wide enough for me to fit through, but sketchy dude stayed on my tail the whole time. Finally, I just couldn't run any longer because frankly, I'm a wee bit out of shape. I think he was glad when I stopped too though, because he was absolutely panting up a storm. Anyway, after he caught his breath, he told me he simply wanted his book back. He never did tell me how he knew my name though.

I give Origin three Picassos.

Dan Brown is the #1 New York Times bestselling author of The Da Vinci Code and, previously, Digital Fortress, Deception Point, and Angels and Demons. He is a graduate of Amherst College and Phillips Exeter Academy, where he spent time as an English teacher before turning his efforts fully to writing. He lives in New England with his wife.

If you would like to read some legitimate reviews of Origin, just click on any of the following links.

The Real Book Spy // Blabbaholics and Bookworms
Posted by Just Another Girl and Her Books at 12:26 PM