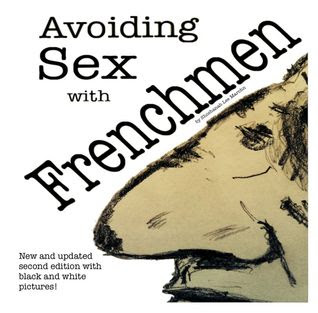 New, updated second edition with black and white pictures! It's Paris like you've never seen it- ugly, unromantic, and hilarious. Pure as newly driven snow, three teenaged girls arrive in Paris, with little money and a large passion for art (especially art where lots of people die gruesome and terrible deaths). Immediately, they are constantly propositioned by men. Everywhere. Anything they do, men ask to have sex with them. They don't say hello or how are you, they just ask to have sex with them. Why do the French men like them so much? What is wrong with these people who won't let you walk ten feet without asking to have sex with you? Will the three of them even survive the trip? Sketch drawings of every Frenchman who approached them complete the hysterical telling of this ill-fated tale.

My husband bought me a copy of this book when I was planning a trip to Paris with some of my friends. I'm not sure what he was trying to tell me with this gift, but we all know that I love to read so I'm sure he only had the best of intentions with absolutely no ulterior motives at all.

I figured since my husband very intentionally bought this book before my trip, I should read it before heading to France though, it only seemed right. I'd like to be able to say that this book had a lot of helpful information, but mostly while I was reading I was really confused about why any of the things mentioned would be a problem. For instance, you're apparently supposed to avoid coffee shops after like two pm because thats the time of day when they magically become dens of iniquity, or something like that. Seriously, it just seemed ridiculous.

But then I actually went to France and OMG guys, I'm pretty sure this book kept me from getting some exotic French STDs. You may think that you've got this amazing willpower and don't need tips on how to avoid having sex with random men, and you're probably mostly right, but French men are like an entirely different species, and they're nearly one hundred percent irresistible. If I had not already read this book, I would have fallen on so many French dicks while I was in Paris. It almost certainly would have ended my marriage. So if you are a woman (or a gay man) with a significant other planning a trip to France at any point in the future, you should absolutely read this book first. You and your partner will thank you.

I give Avoiding Sex with Frenchmen 37 condoms.

Shoshanah Lee Marohn is an insignificant author who would like to express her deepest appreciation that you are even reading this. If you are a purchaser of one of her obscure books of doodlings, rest assured that you have made her day. Shoshanah lives on a farm in the Midwestern United States. Her hobbies include sighing deeply and making sculptures of strange woolen creatures. In the future, she hopes to achieve enough success to eat countless pints of fresh blueberries.

I'm being lazy right now. For alternate reviews, just check the book info on either Goodreads or Amazon to see what real people had to say about this book.
Posted by Just Another Girl and Her Books at 3:08 PM