Girls Made of Snow and Glass by Melissa Bashardoust 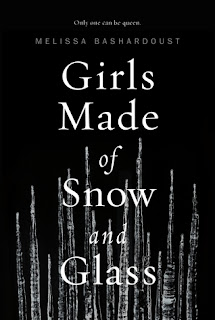 Frozen meets The Bloody Chamber in this feminist fantasy reimagining of the Snow White fairytaleAt sixteen, Mina's mother is dead, her magician father is vicious, and her silent heart has never beat with love for anyone—has never beat at all, in fact, but she’d always thought that fact normal. She never guessed that her father cut out her heart and replaced it with one of glass. When she moves to Whitespring Castle and sees its king for the first time, Mina forms a plan: win the king’s heart with her beauty, become queen, and finally know love. The only catch is that she’ll have to become a stepmother.Fifteen-year-old Lynet looks just like her late mother, and one day she discovers why: a magician created her out of snow in the dead queen’s image, at her father’s order. But despite being the dead queen made flesh, Lynet would rather be like her fierce and regal stepmother, Mina. She gets her wish when her father makes Lynet queen of the southern territories, displacing Mina. Now Mina is starting to look at Lynet with something like hatred, and Lynet must decide what to do—and who to be—to win back the only mother she’s ever known…or else defeat her once and for all.Entwining the stories of both Lynet and Mina in the past and present, Girls Made of Snow and Glass traces the relationship of two young women doomed to be rivals from the start. Only one can win all, while the other must lose everything—unless both can find a way to reshape themselves and their story.

I won a copy of this book through the Goodreads First Reads giveaway program (that's actually true, and I'm excited to actually read this book when I have time, but let's not let the truth distract us from this review). I entered the giveaway because I was pretty sure this book was about ice sculptures that come to life, like in Toy Story but ice sculptures. Who wouldn't want to read that story.

So I wasn't exactly right about what the story was going to be about, but I wasn't entirely wrong either, which is kind of a first. So this is a fairytale retelling that is really kind of a rip-off of the tv show, Once Upon a Time. The conflict between Mina and Lynet is so much like the conflict between Regina and Snow. I don't necessarily blame the author though, because since OUAT has changed the cast, I kind of want a return to that old feeling anyway, so even though it seems like a rip-off, it was a welcome rip-off, like good fan fiction.

While I was reading, I couldn't help thinking about how Lynet would probably be super easy to beat if only Mina knew that she was made out of snow. Seriously, you just pull out a high powered blow dryer and melt the bitch, problem solved, right. Surely it would be that easy. At least it should be that easy. So it was lucky for Lynet that Mina didn't know that about her because it meant she had a fighting chance, and I really did want her to win. I also wanted her to to come clean with her stepmother and tell her how much she respected her because that might have solved all their problems anyway.

Overall I give this book 3.5 poison apples.

Melissa Bashardoust received her degree in English from the University of California, Berkeley, where she rediscovered her love for creative writing, children’s literature, and fairy tales and their retellings. She currently lives in Southern California with a cat named Alice and more copies of Jane Eyre than she probably needs. Girls Made of Snow and Glass is her first novel.

Being lazy, just check Goodreads or Amazon for real reviews of this book, or you know, Google it. I'm sure there are several blog reviews of this one because I've seen it pretty much everywhere it seems.
Posted by Just Another Girl and Her Books at 3:32 PM