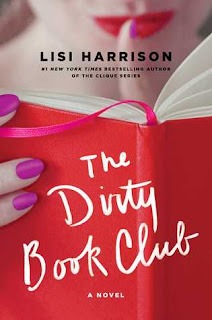 From the #1 New York Times bestselling author of The Clique series comes a novel about the importance of friendship, and, of course, the pleasure of a dirty book.M.J. Stark’s life is picture-perfect—she has her dream job as a magazine editor, a sexy doctor boyfriend, and a glamorous life in New York City. But behind her success, there is a debilitating sense of loneliness. So when her boss betrays her and her boyfriend offers her a completely new life in California, she trades her cashmere for caftans and gives it a try. Once there, M.J. is left to fend for herself in a small beach town, with only the company of her elderly neighbor, Gloria, and an ocean that won’t shut up.One afternoon, M.J. discovers that Gloria has suddenly moved to Paris with her friends to honor a fifty-year-old pact. And in lieu of a goodbye, she’s left a mysterious invitation to a secret club—one that only reads erotic books. Curious, M.J. accepts and meets the three other hand-selected club members. As they bond over naughty bestsellers and the shocking letters they inherited from the original club members, the four strangers start to divulge the intimate details of their own lives… and as they open up, they learn that friendship might just be the key to rewriting their own stories: all they needed was to find each other first.

I heard a rumor that a member of my book club was masquerading as THE Lisi Harrison to write a tell all memoir about the club, and frankly, that's not cool. First of all, she's not the real Lisi Harrison. And on top of that, she could have at least been upfront with us about what she was doing so that we could decide if we wanted to be included in her little story. I don't even care that she's marketing it as fiction, because after reading it, it is super obvious that this book is about our book club. And honestly, I'm livid right now.

See, she basically paints me as this huge slut, and that's totally not accurate. Just because I sleep with a different guy almost every weekend and have taken to calling all of them bae to ensure that I don't call them by the wrong name, is no reason for her to look down on me. Not all of us have cobwebs sprouting between our legs like she does, just saying. And what she said about Steph's husband, totally uncalled for. Seriously, she's lucky she already moved and left the book club or else she would be dealing with us, and you do not want to see a pissed off Amanda after a couple glasses of wine.

My advice to you, don't buy this book unless you want to read a whole bunch of lies and half-truths written by a bitter, salty old hag. She's just jealous that she can't hang with the rest of us.

Lisi Harrison worked at MTV Networks in New York City for twelve years. She left her position as senior director of development in 2003 to write The Clique series. That series has sold more than eight million copies and has been on the New York Times bestseller list for more than two hundred weeks, with ten titles hitting #1 and foreign rights sold in thirty-three countries. The Alphas was a #1 New York Times bestseller, and Monster High was an instant bestseller. Her latest YA series is Pretenders. Lisi lives in Laguna Beach, California, and has been a proud member of her own dirty book club since 2007.

If you would like to read some legitimate reviews of The Dirty Book Club, just click any of the following links.

Unconventional Book Views // Brainfarts and Books // A Belle in a Bookshop
Posted by Just Another Girl and Her Books at 12:55 PM