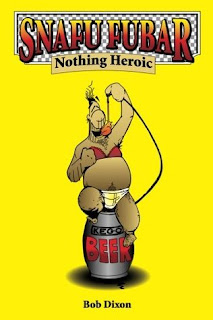 *****WARNING***** If you are easily offended, then this is NOT the book for you. Please put it down and back away slowly. However, if you have a warped sense of humor, please read on. In the town of Lost Hope, Florida reside two heroes unlike any others. These champions of justice go by the names of Snafu Fubar and General Nuisance. Nightly they patrol their fine city to protect it from evil's grasp. And by 'patrol' we mean they sit on a porch, appropriately nicknamed 'The Fucking Nuisance Cave', drinking beers, smoking cigars, and talking about sex.

I found a copy of this book just sitting on a table at my local watering hole along with a plastic bag full of power strips and extension cords. The table was unoccupied when I arrived, so I assumed that the previous owner had no intention of returning for their things, so I took them home with me. Strangely enough, the bouncer tried to stop me from leaving with the power strips, but I convinced him that the other bouncer had said I could bring them in with me because I'd just been to Walmart before heading to the bar. Bouncers are so gullible, it's no wonder they fall for my fake ID all the time.

Anyway, I'm a big bar rat, so I thought that I was going to have a lot in common with the main characters of this book, but these guys are just freaking idiots. I'm pretty sure they could get jobs as bouncers though, they should probably look into that. They'd maybe do more good that way than they do by sitting on their lame ass porch drinking beer all the time.

Seriously, this whole story was freakin' pointless. It was even worse than On the Road by Jack Kerouac, and that book was probably one of the dumbest books I have ever read in my entire life, that is until this book came along and took the top spot. Honestly, it's no wonder it was just left on the table at the bar. I wouldn't have wanted to bother with taking this garbage home with me either if I'd known what was inside it. But we'll always have the power strips.

I give this book 1 tequila shot.

Bob Dixon is a two-time Guinness World Record holder for the World's Longest Cartoon Strip. He is the author and creator of a number of comic book titles for Pocket Change Comics, including Assassinette: The Mind Stalker, Psyco Duck, Jester's Dead, The Holy Knight, Riplash, Shadow Slasher, and Warzone 3719. Bob has written two children books, Rooty the Tree Troll and Holiday Bunny; two young adult books, Mouch and Company: The Dream Psychic and Rags and Ruins; and is the co-author of Will Jones' biography A Tough Call. Bob is also the Writer/Director of the movie Dr. Prozak's Office.

I was unable to find any blog reviews for Snafu Fubar, so you'll just have to check out Amazon and Goodreads for legitimate reviews.
Posted by Just Another Girl and Her Books at 1:02 PM