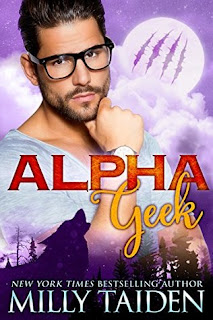 Lioness shifter Scarlett Milan hates that she wants her boss more than her next breath. All she thinks about is how his black-rimmed glasses and bow tie are sexier on him than any other man. But since he’s human, she’s afraid she could break him, even kill him, during a night of wild sex. Knox Daniels, wimpy bean counter, has lusted after Scarlett since the moment he met her. The fact she’s his best friend’s little sister has stopped all dirty thoughts. Well, almost. After he breaks up with his girlfriend, getting his hands on Scarlett is the first thing on his to-do list. Being murdered was not. A vicious attack almost kills Knox, but science comes to the rescue. Now he’s no longer the weak human Scarlett was afraid to touch. Actually, no one knows what he is except possessive, aggressive, and demanding she be his. They’ll have to team up to keep him alive while figuring out if he’s a deranged killer or just the most powerful alpha ever known. Reader's Note: Hang on to your panties, folks. This is going to be quick, dirty and will have your ereader asking for a cigarette. As with all my books, adults only, please. That means if you're a prude and don't like hot sex or dirty talk, step away from the book. All others, I love you freaky people.

I'm not going to lie. I picked up a copy of this book because the cover intrigued me something fierce. I guess I have a bit of a thing for a strong sexy man in glasses. Of course, I thought he was an angel at first, but it turns out those are clouds behind him, not wings. Boy was that a disappointment.

The cover was even more misleading than that though, because Knox wasn't even hot in the beginning. He was just a skinny nerd like my brother, eww. Like I could not understand what Scarlett saw in him at all, at least not until he almost died and did turn all hot, kind of like Captain America's wonderful transformation. I guess maybe Scarlett had the right idea after all because surely it'd be easier to get into the hot guys pants if you were nice to him when he was a nerd, and I would give pretty much anything to get into Captain America's pants, just please don't tell my husband. He might not be cool with that.

I'm not sure why Knox's transformation is such a big mystery for Scarlett. I mean, she's a lioness shifter, so shouldn't she be able to sniff out the differences and stuff in him? I also didn't understand why she didn't rejoice when he turned all alpha after his brush with death, since that should have been a pretty clear indication that he could totes handle several nights of wild sex with her. I mean, I would be rejoicing if the person I'd been lusting after was finally available for me. It just seemed really dumb.

SIGN UP FOR Milly's NEWSLETTER FOR LATEST NEWS! Just copy and paste the following link into your web browser: http://eepurl.com/pt9q1New York Times and USA Today Bestselling AuthorHi! I’m Milly Taiden. I love to write sexy stories featuring fun, sassy heroines with curves and growly alpha males with fur. My books are a great way to satisfy your craving for paranormal romance with action, humor, suspense and happily ever afters. I live in Florida with my hubby, our boys, and our fur children “Needy Speedy” and “Stormy.” Yes, I am aware I’m bossy, and I am seriously addicted to iced caramel lattes. I love to meet new readers, so come sign up for my newsletter and check out my Facebook page. We always have lots of fun stuff going on there. Website: millytaiden.comFacebook: facebook.com/millytaidenpage

If you would like to read some legitimate reviews of Alpha Geek, just click any of the following links.

Cat's Books // Shifter Haven // Edgy Reviews
Posted by Just Another Girl and Her Books at 9:47 AM