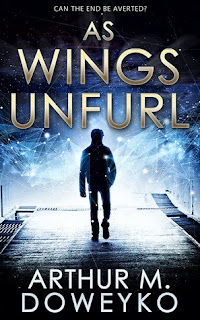 Applegate Bogdanski returns from Vietnam with a missing leg, a Purple Heart, and an addiction to morphine. He stumbles through each day, looking forward to nothing and hoping it will arrive soon. When he attempts to thwart a crime, he is knocked unconscious and wakes up to discover that people are once again calling him a hero, though he feels undeserving of the praise.Apple returns to work and meets Angela, a mysterious woman who claims to be his guardian. Immediately, he feels a connection to her, which morphs into an attraction. But he soon discovers that Angela is much more than she seems.Apple and Angela are swept up in a conspiracy that stretches through time and space. Together, they must fight to save everything they hold dear from an alien race bent on destroying humanity.

I found a copy of this book on my parents bookshelves, probably because my dad is a huge science fiction nerd, and because the cover is mostly blue, I decided to steal it. I'm sure my parents won't miss it. They haven't noticed any of the other books I've swiped from their shelves in the past few months.

I had a hell of a time getting into this story, which really sucks because I usually really like science fiction. This just didn't really feel like science fiction to me, except for the stupid aliens. But even that part of the story is set in the past, so it clearly didn't happen, and it's not ever going to happen because that time has already passed in the real world, which takes away about ninety-five percent of the fun stuff in science fiction. I mean, the possibility that we're going to have super cool spaceships and laser guns and live on other strange worlds is the reason to read science fiction, if you ask me, and this book really doesn't have any of that to it. I mean, shit, the only aliens it even talks about are trying to kill us. I guess I should at least be thankful that this dude named Apple saved the world from the aliens that the Men in Black won't let the world even know exist, but I just have a hard time accepting that it wasn't just a nuclear power plant meltdown that I saw. I mean, that's what the dude in the suit said it was.

I will say that this was at least a fast read even though I had a hard time believing any of it. So for that I give it two cool spaceships.

As a scientist, Arthur has authored 100+ publications, and shares the 2008 Thomas Alva Edison Patent Award for the discovery of Sprycel, a new anti-cancer drug. He writes hard science fiction, fantasy and horror. His debut novel, Algorithm, which is a story about DNA and the purpose of humanity, garnered a 2010 Royal Palm Literary Award (RPLA) and was published by E-Lit Books October 2014. He has published a number of short stories, many of which were finalists in RPLA competitions. A number of his short stories have garnered awards, which include Honorable Mentions in the international L. Ron Hubbard Writers of the Future Contest and First Place in P&E Readers Polls. His recently completed Angela's Apple, a novel about angels who are not angels, won 1st place as Best SciFi Novel at the 2014 RPLA and will be published by Red Adept Publishing. His current project, Henry The Last, is about the last human being, a Lakota Indian cyborg. He lives in Florida with his wife Lidia, happily wandering the beaches and jousting with aliens.You can find more about him, read his edgy science blogs, or enjoy his art work at www.ArthurMDoweyko.com

If you would like to read some legitimate reviews of As Wings Unfurl, just click any of the following links.

The Book Adventures of Emily // Marian L. Thorpe // Big Al's Books and Pals
Posted by Just Another Girl and Her Books at 12:22 PM