Under the Spanish Stars by All Sinclair 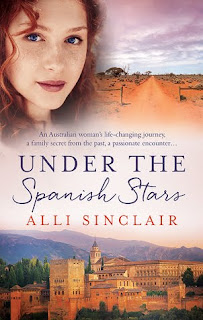 Charlotte Kavanagh’s beloved grandma Katarina Sanchez is gravely ill, so when she begs Charlotte to travel to her homeland in Andalucía to uncover the truth behind a mysterious painting, Charlotte agrees.  Taking leave from her soul-destroying job and stalled life in Australia, Charlotte embarks on a quest through Granada’s ancient cobble-stoned streets and vibrant neighbourhoods. There she meets Mateo Vives, a flamenco guitarist with a dark past, and through him she quickly becomes entangled in the world of flamenco and gypsies that ignites a passion she had thought lost. But the mystery surrounding the painting deepens, reaching back in time to the war-torn Spain of the 1940s and Charlotte discovers her grandmother’s connection to the Spanish underground. Who is her grandmother, really? What is Mateo’s connection to her family history? And why is finding answers to a family mystery turning into a journey of self-discovery for Charlotte?Weighed down by secrets, betrayals and shattered relationships, Charlotte finds herself questioning the true meaning of heritage, family and love.

I found an abandoned copy of this book on train I was taking to Spain, so I thought that it must be an informative guidebook. With that in mind, I stopped what I was reading to dive into this book. It is NOT a guidebook for nights out in Spain, so I felt like the entire thing was just a freakin' lie!

In spite of the fact that the book wasn't what I thought it was going to be, it did end up sucking me in and making me hungry to try some real, authentic Spanish food (thank goodness I was already on my way to Spain!) It even made me want to visit some of the places talked about in the book, unfortunately I wasn't headed for Granada, so I didn't manage to visit any of them on my trip.

The part of the story that really got to me was the mystery about Charlotte's grandma, and her role in the resistance during WWII. I absolutely love WWII era historical fiction, so that aspect of this story almost completely redeemed it for me after my initial disappointment with the contents. It definitely contributed to getting me sucked into the story and keeping me flipping the pages until I almost missed my stop on the train, which would have been awful.

I could have done without the romance aspect of the story, because it was just a bit too fanciful for my tastes, and I wish there had been more talk about different places to see and eat in Spain, especially outside of Granada (Majorca would have been super helpful for me) since that's what I thought I was getting when I picked the book up. But for what it was, I guess it was already.

I give Under the Spanish Stars three tasty tapas.

Alli Sinclair is a multi award-winning author who spent her early adult years travelling the globe, intent on becoming an Indiana Jones in heels. She scaled mountains in Nepal, Argentina, and Peru, rafted the Ganges, and rode a camel in the Sahara. Argentina and Peru became her home for a few years and when she wasn’t working as a mountain or tour guide, Alli could be found in the dance halls dancing the tango, salsa, merengue, and samba.All of these adventures made for fun storytelling and this is when she discovered her love of writing. Alli’s stories capture the romance and thrill of exploring new destinations and cultures that also take readers on a journey of discovery. Alli volunteers as an author role model with Books in Homes, promoting literacy and reading amongst young people.To find out more about Alli, please visit www.allisinclair.com

If you would like to read some legitimate reviews of Under the Spanish Stars, just click any of the following links.

All the Books I Can Read // Book Muster Down Under // Renee Conoulty
Posted by Just Another Girl and Her Books at 2:58 AM