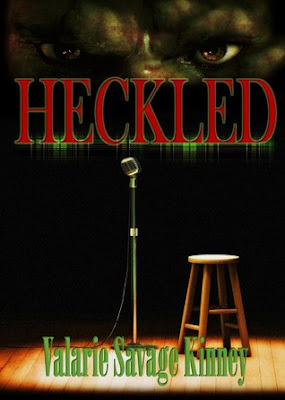 Drinking. Drugging. Cutting. Exxel Jensen has spent his life finding ways to rid himself of the Heckler, and failed miserably. On the surface, his future is bright: a beautiful wife, a child on the way, and a career he loves as a stand up comedian. Beneath the surface lurks the darkness: crippling depression, anxiety, and alcoholism. Helena Jensen has seen her husband spiral downward before and feels helpless to stop it as she watches him falling again. She would do anything to help him, anything to diminish the pain that plagues him.Exxel knows she would, and he also knows she can’t. Because the person fueling his depression and addictions is someone she can’t see. And how can he explain the Heckler to anyone, when he doesn’t even understand it himself?

I sold my soul to the devil (Amazon) for a copy of this book. I think I got the better end of that deal because my soul was pretty tarnished by the time I handed it over in exchange for this sparkly new book.

I wasn't sure if I would like this book because the authors name appears in a vomit green font, and I'm rather anti-vomit in my personal life. It definitely started the book off on the wrong foot for me. The good news is that my opinion of the book couldn't get much lower from there.

I found Exxel somewhat relatable. The collection of empty wine bottles in my office is rather...extensive (but I swear that's mostly because I'm just a horrible housekeeper.) That was where our personal connection ended though. The character that I really connected with was, The Heckler.

Yes, I too have been a heckler. I can't even count on both hands the number of stand-up comedy shows I've been kicked out of for heckling. I even sought help for my problem, but my therapist refused to see me after my second appointment because I heckled her too. I barely leave my house now because I'm afraid I won't be able to control the heckling. But I'm not sure I even want to anymore.

Valarie Kinney is a writer, fiber artist and Renaissance Festival junkie with a wicked caffeine addiction. She resides in Michigan with her husband, four children, and two insane little dogs. Author of Heckled, Slither, and Just Hold On, as well as the short stories Copper and Ailith in the KAPOW! anthologies from 7DS Books. Editor and narrator for Dragons of Faith.

Fallen Over Book Reviews // Moxxley @Platypire Reviews
Posted by Just Another Girl and Her Books at 2:49 PM