The Mummy by Anne Rice 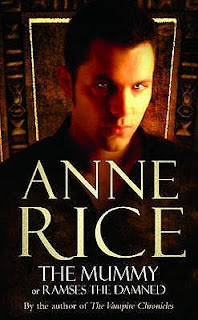 Ramses the Great has reawakened in opulent Edwardian London. Having drunk the elixir of life, he is now Ramses the Damned, doomed forever to wander the earth, desperate to quell hungers that can never be satisfied. He becomes the close companion of a voluptuous heiress, Julie Stratford, but his cursed past again propels him toward disaster. He is tormented by searing memories of his last reawakening, at the behest of Cleopatra, his beloved queen of Egypt. And his intense longing for her, undiminished over the centuries, will force him to commit an act that will place everyone around him in the gravest danger.

While vacationing in London, I found a scroll on which this book was written tucked away in a rather large and conspicuous cranny in an old church. I mean, I probably should have left it alone, but no one saw me take it, so is it really theft?

Anyway, I've never read a book in scroll form before, and the paper that it was written on was rather flimsy. It also used a whole lot of emojis, so some of my translations may have been a little off, but I still got the basic gist of the story I'm sure. (Side note, did you know that platypuses were quite popular in ancient Egypt? Also butt plugs, but I'm sure the two are not connected.)

So there were parts of this book that confused me. Like when Ramses is reawakened at Big Ben, he's doomed to roam the Earth forever trying to drink the blood of virgin rabbits, but this isn't his first reawakening. Like how can someone who is going to roam the Earth forever be reawakened more than once? It makes no sense y'all. And then trying to bring back crazy cat lady Cleopatra was just dumb, and kind of cruel. Forcing his love to live his same cursed life hunting virgin rabbits for sustenance is absolutely not the sign of true love. If my husband did that to me, I'd stake him myself, and the fucker would deserve it. Then I'd chuck his body into a church so that he could never be reawakened again. But that's just me.

So anyway, I give my translation of this scroll, 2 out of 5 unicorns because aliens have big feet.

Anne Rice was born and raised in New Orleans, Louisiana. She holds a Master of Arts Degree in English and Creative Writing from San Francisco State University, as well as a Bachelor's Degree in Political Science. Anne has spent more of her life in California than in New Orleans, but New Orleans is her true home and provides the back drop for many of her famous novels. The French Quarter provided the setting for her first novel, Interview with the Vampire. And her ante-bellum house in the Garden District was the fictional home of her imaginary Mayfair Witches.  She is the author of over 30 books, most recently the Toby O'Dare novels Of Love and Evil, and Angel Time; the memoir, Called Out of Darkness;and her two novels about Jesus, Christ the Lord: Out of Egypt and Christ the Lord: The Road to Cana. (Anne regards Christ the Lord: The Road to Cana as her best novel.) ---- Under the pen name, A.N. Roquelaure, Anne is the author of the erotic (BDSM) fantasy series, The Sleeping Beauty Trilogy. Under the pen name Anne Rampling she is the author of two erotic novels, Exit to Eden and Belinda.Anne publicly broke with organized religion in July of 2010 on moral grounds, affirming her faith in God, but refusing any longer to be called "Christian." The story attracted surprising media attention, with Rice's remarks being quoted in stories all over the world. Anne hopes that her two novels about Jesus will be accepted on their merits by readers and transcend her personal difficulties with religion. "Both my Christ the Lord novels were written with deep conviction and a desire to write the best novels possible about Jesus that were rooted in the bible and in the Christian tradition. I think they are among the best books I've ever been able to write, and I do dream of a day when they are evaluated without any connection to me personally. I continue to get a lot of very favorable feedback on them from believers and non believers. I remain very proud of them." Anne is very active on her FaceBook Fan Page and has well over a million followers. She answers questions every day on the page, and also posts on a variety of topics, including literature, film, music, politics, religion, and her own writings. Many indie authors follow the page, and Anne welcomes posts that include advice for indie authors. She welcomes discussion there on numerous topics. She frequently asks her readers questions about their response to her work and joins in the discussions prompted by these questions.
Alternate Reviews

If you would like to read some legitimate reviews of The Mummy, just click any of the following links.

Kirkus Reviews // Comparative Geeks // Opinions of a Wolf
Posted by Just Another Girl and Her Books at 1:58 PM