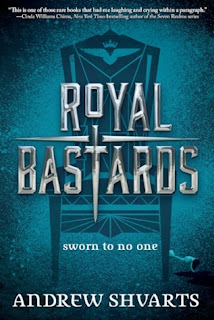 Being a bastard blows. Tilla would know. Her father, Lord Kent of the Western Province, loved her as a child, but cast her aside as soon as he had trueborn children.

At sixteen, Tilla spends her days exploring long-forgotten tunnels beneath the castle with her stablehand half brother, Jax, and her nights drinking with the servants, passing out on Jax’s floor while her castle bedroom collects dust. Tilla secretly longs to sit by her father’s side, resplendent in a sparkling gown, enjoying feasts with the rest of the family. Instead, she sits with the other bastards, like Miles of House Hampstedt, an awkward scholar who’s been in love with Tilla since they were children.

Then, at a feast honoring the visiting princess Lyriana, the royal shocks everyone by choosing to sit at the Bastards’ Table. Before she knows it, Tilla is leading the sheltered princess on a late-night escapade. Along with Jax, Miles, and fellow bastard Zell, a Zitochi warrior from the north, they stumble upon a crime they were never meant to witness.

Rebellion is brewing in the west, and a brutal coup leaves Lyriana’s uncle, the Royal Archmagus, dead—with Lyriana next on the list. The group flees for their lives, relentlessly pursued by murderous mercenaries; their own parents have put a price on their heads to prevent the king and his powerful Royal Mages from discovering their treachery.

The bastards band together, realizing they alone have the power to prevent a civil war that will tear their kingdom apart—if they can warn the king in time. And if they can survive the journey . . .

I bought a copy of this book thinking that it was the next book in the Game of Thrones series (why I didn't look at the author's name I don't know) but it's not! On the bright side, that means that some of my favorite characters at least survived the story.

In spite of the fact that I quickly realized that this book is NOT in the Game of Thrones series, I still had a hard time really convincing myself that they two aren't at least a little bit connected. Arya, I mean Tilla, likes to explore the tunnels beneath the castle (I bet she spends an inordinate amount of time chasing feral cats too, to be quite honest), and she loves her half-brother Jon Snow, I mean Jax. Clearly the similarities are pretty blatant here. Just look at that cover. It's got a sword and a freakin' throne on it, and everyone knows that George R.R. Martin has a copyright on that particular cover motif (probably.) And then the whole, parents wanting their children dead, that's so typical Tyrion Lannister. So basically, this was a YA rip-off of Game of Thrones...but that's not necessarily a bad thing, because all that death and treachery is not something that impressionable children should be exposed to, am I right?

Much like Arya in A Game of Thrones, Tilla is my favorite character in Royal Bastards. I feel really bad for her that dad turned into such a jerk when his legitimate children were born though, but I mean, at least he didn't throw her out on the street like he could've done.

So basically, if your kids have been bugging you to let them read/watch Game of Thrones, give them this book instead.

I give this book 3 out of 5 Iron Thrones.

Andrew Shvarts is an author of novels and video games. He has a BA in English Literature and Russian from Vassar College. He works for Pixelberry Studios as a designer, making mobile games like High School Story, Choices, and more. Andrew lives in San Jose, California, with his wife, toddler, and two kittens. Find him on Twitter @Shvartacus.

If you would like to read some legitimate reviews of Royal Bastards, just click any of the following links.

Kirkus Reviews // The Eater of Books // Disgruntled Mom
Caroline Andrus
Posted by Just Another Girl and Her Books at 1:06 PM