How to Party with an Infant by Kaui Hart Hemmings 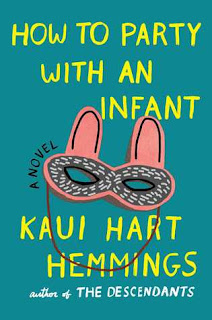 The new novel from the New York Times bestselling author of The Descendants—a hilarious and charming story about a quirky single mom in San Francisco who tiptoes through the minefields of the “Mommy Wars” and manages to find friendship and love.When Mele Bart told her boyfriend Bobby she was pregnant with his child, he stunned her with an announcement of his own: he was engaged to someone else.Fast forward two years, Mele’s daughter is a toddler, and Bobby and his fiancée want Ellie to be the flower girl at their wedding. Mele, who also has agreed to attend the nuptials, knows she can’t continue obsessing about Bobby and his cheese making, Napa-residing, fiancée. She needs something to do. So she answers a questionnaire provided by the San Francisco Mommy Club in elaborate and shocking detail and decides to enter their cookbook writing contest. Even though she joined the group out of desperation, Mele has found her people: Annie, Barrett, Georgia, and Henry (a stay-at-home dad). As the wedding date approaches, Mele uses her friends’ stories to inspire recipes and find comfort, both.How to Party with an Infant is a hilarious and poignant novel from Kaui Hart Hemmings, who has an uncanny ability to make disastrous romances and tragic circumstances not only relatable and funny, but unforgettable.
Review

I got a copy of this book for my sister-in-law for her baby shower, but then I didn't give it to her because I forgot. That's my story and I'm sticking to it. Also, it was so hilarious when I started reading it that I was loathe to part with it. She probably wouldn't have had time to read it after the baby was born anyway.

Now I consider myself something of an expert when it comes to partying with infants, I've done my fair share of it after all. I've basically been the parent of the year for the past eight years running. It's a streak that I'm rather proud of. But my partying has nothing on the partying in this book, probably.

I honestly really related to Mele in this book. Like it's hard to raise kids and keep your sanity without wanting to get blackout drunk on a somewhat regular basis. I'm just lucky enough to have my kids father in the picture so I can actually do that on a semi-regular basis while he stays sober. I can't imagine doing it as a single parent.

What I didn't get was why she didn't resist her baby daddy's behavior more. Like he's been a complete asshat since the baby was born, and now all of a sudden he wants to be part of his daughter's life because he's getting married. That's not how parenthood works. If you're not going to be there for the midnight feedings and blowout diapers, you don't really deserve the cuteness to feature as a major player in your wedding. If I were Mele, I would have absolutely refused.

In the end, I guess I understand why Mele was trying to be the bigger person. I mean it set a good example for her kid, and that's something you're supposed to do as a parent, I guess, I'm not really sure. But it had to be hard to do, especially since she was basically still in love with her ex.

But like I said at the beginning, the book was hilarious and I definitely recommend it. 5 out of 5 pacifiers.

Kaui Hart Hemmings has degrees from Colorado College, Sarah Lawrence, and she was a Stegner Fellow at Stanford University. Her first novel, a New York Times bestseller, THE DESCENDANTS, has been published in twenty-two other countries and is now an Oscar-winning film directed by Alexander Payne and starring George Clooney. She has also published a story collection, HOUSE OF THIEVES. Her novel, The POSSIBILITIES, is an Oprah and People magazine "must read" and has been optioned by Jason Reitman. Her debut YA novel, JUNIORS, has been published by Penguin Putnam. Her most recent novel is HOW TO PARTY WITH AN INFANT. She lives in Hawaii. Follow: http://instagram.com/kauiharthemmingshttps://kauiharthemmings.wixsite.com/book

If you would like to read some legitimate reviews of How to Party with an Infant, just click any of the following links.

Kirkus Reviews // Publishers Weekly // Book Page
Posted by Just Another Girl and Her Books at 2:33 PM