The Year of the Flood by Margaret Atwood 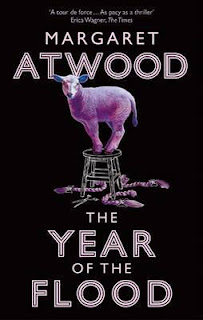 The times and species have been changing at a rapid rate, and the social compact is wearing as thin as environmental stability. Adam One, the kindly leader of the God's Gardeners--a religion devoted to the melding of science and religion, as well as the preservation of all plant and animal life--has long predicted a natural disaster that will alter Earth as we know it. Now it has occurred, obliterating most human life. Two women have survived: Ren, a young trapeze dancer locked inside the high-end sex club Scales and Tails, and Toby, a God's Gardener barricaded inside a luxurious spa where many of the treatments are edible.
Have others survived? Ren's bioartist friend Amanda? Zeb, her eco-fighter stepfather? Her onetime lover, Jimmy? Or the murderous Painballers, survivors of the mutual-elimination Painball prison? Not to mention the shadowy, corrupt policing force of the ruling powers . . .
Meanwhile, gene-spliced life forms are proliferating: the lion/lamb blends, the Mo'hair sheep with human hair, the pigs with human brain tissue. As Adam One and his intrepid hemp-clad band make their way through this strange new world, Ren and Toby will have to decide on their next move. They can't stay locked away . . .
By turns dark, tender, violent, thoughtful, and uneasily hilarious, "The Year of the Flood" is Atwood at her most brilliant and inventive.

I stole my copy of this book from my local thrift store, because expecting someone to pay a whole twenty-five cents for a pristine copy of a used book (seriously the spine isn't even broken) is just asking way too much. I don't even care that twenty-five cents is like three percent of the purchase price, it's still too much.

This book took me back to my youth and the year of the flood that I lived through. I remember that year, I mean, I don't remember exactly which year it was, but I remember the flood. It wasn't the '51 flood, no, I wasn't even the beginning of a twinkle in my daddy's eye in '51, this flood was much later and apparently far less severe, but I think advancements in technology between the 50's and 90's probably largely account for the difference in perception there. Anyway, back to the flood. School was cancelled during the flood. The river waters had risen so high that the bridge between Cottonwood and Strong City was impassable, cutting the school district in half-ish. The waterfall had disappeared, slight ripples in the water were the only thing that indicated where the dam was located. That week was probably the best week of the school year for most of my classmates.

If times had been different, life back then would probably have been much like what is described in The Year of the Flood. We would have been fighting for survival against crazy cross-breeds that both want to be our best friends forever and tear us limb from limb. Survival of the fittest would have been the name of the game, and I would have been a goner. Thank goodness, times were what they were and there was just a little bit of water damage to deal with.

MARGARET ATWOOD, whose work has been published in over thirty-five countries, is the author of more than forty books of fiction, poetry, and critical essays. In addition to The Handmaid's Tale, her novels include Cat's Eye, shortlisted for the Booker Prize; Alias Grace, which won the Giller Prize in Canada and the Premio Mondello in Italy; The Blind Assassin, winner of the 2000 Booker Prize; and her most recent, Oryx and Crake, shortlisted for the 2003 Booker Prize. She lives in Toronto with writer Graeme Gibson.

If you would like to read some legitimate reviews of The Year of the Flood, just click on any of the following links.

Every Read Thing // Shelf Notes // Not Bad Reviews
Posted by Just Another Girl and Her Books at 7:06 PM